Dolce is by Don De Marco, a stunning 16.1h Black Premium Oldenburg stallion by the outstanding Grand Prix stallion Donnerwetter, who is also the sire of the legendary Donnerhall. Don De Marco is out of the States Premium mare World Class by First Class. "Donny" is developing a following for siring talented dressage and hunter prospects that have great temperaments. Donny possesses, and passes on to his foals, the wonderful traits that Donnerwetter's offspring are known for - highly intelligent and forward, with an excellent canter and ability for collection.

Dolce is out of Greetings, an elegant 16.3h Oldenburg mare by the 17.1h Elite Hanoverian stallion, Gonzo I. Greetings is a Premium mare with both RPSI and American Hanoverian Society and was the Champion at both her AHS and RPSI inspection. Greetings had a very successful career as a hunter on the A circuit prior to retiring from the show ring. She is a beautiful mare with big gaits suitable for dressage and a fantastic temperament that she imprints on her foals. 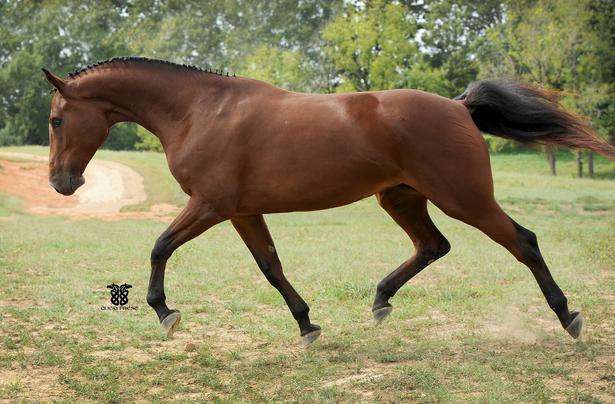 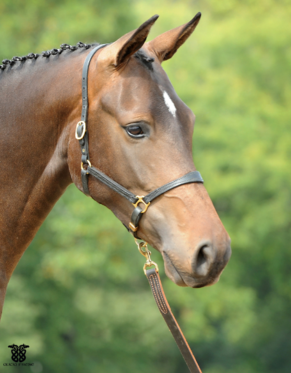 "Danny" is a lovely, sweet mare sired by the amazing Holsteiner stallion, Love Affair and out of the Holsteiner mare Pepita.  Danny did beautifully at her mare inspection in 2015, earning 49 points (one point shy of Premium Select) earning many 7s and an 8 for her stunning trot. She was awarded premium status and named site champion mare.

Danny's sire, Love Affair, is a handsome dark bay Holsteiner stallion that is now retired. His get are known for for being talented in multiple disciplines as well as for being easygoing with can-do attitudes.  His get have excelled in dressage, eventing and in the hunter ring.

Danny will be bred to the Oldenburg stallion, Manhattan in 2017.

Pretty Woman is back in foal to Don De Marco  for 2017. Contact us for in utero terms. 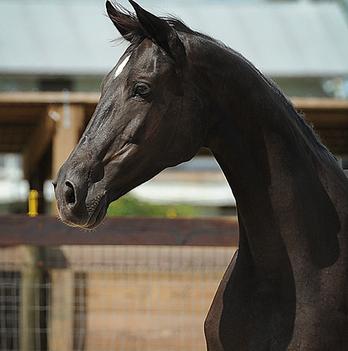 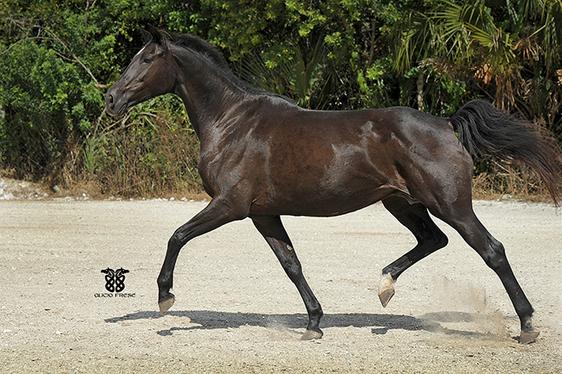 Pretty Woman - the perfect name for such a lovely mare. “Leah” is by Lancelot x Voltaire (a Frohling dam). Her bloodlines include Voltaire, Furioso, Nimmerdor, Landadel, Landgraf and Lucky Boy. Leah is accepted by KWPN, AHHA and ISR/Oldenburg.

Leah was imported from Europe in 2006. She showed as a jumper up to level 6 in Europe and level 5 here in the U.S. before retiring from the show ring. 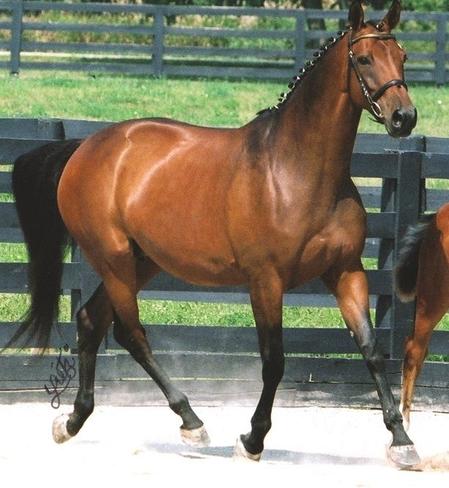 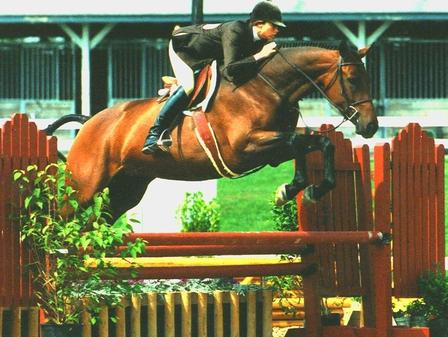 We offer a wide variety of horse and pony types. Draft and Thoroughbred crosses or purebred Thoroughbreds and horses of many different breeds are also available. 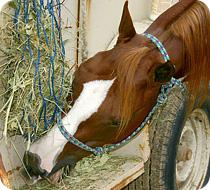 Greetings is a beautiful Oldenburg mare by Gonzo I out of Know Regrets. Greetings is a Premium mare with both RPSI and American Hanoverian Society and was the Champion at her AHS inspection. She also in the ISR/Oldenburg main mare book.

Greetings had a successful career as a hunter on the A circuit prior to retiring due to injury. She has beautiful gaits, lovely conformation, a stunning, ultra-feminine head, and has the sweetest temperament. She has proven to be a wonderful broodmare, producing many premium foals and passing on her sweet personality.  We value these traits so highly that we kept Dolce Signorina, a dark bay filly by the Oldenburg stallion Don De Marco out of Greetings, for our broodmare band.

Her sire, Gonzo I, is a 17.1 H., Elite Hanoverian Stallion approved by: American Warmblood Registry; Hanoverian; Westfalen; Oldenburg; ISR. He is nominated for IJF and IHF.Gonzo I is a descendant of the famous Hanoverian G Line. In the realm of show jumping, Gonzo I's pedigree is impeccable. His dam is a full sister to the legendary Desiter, who in one decade with the Olympian Paul Schockemoehle amassed $1.5 million in earnings, winning an Olympic Silver medal, four German National Championships and three European Championships. Gonzo I's sire, Gepard, produced Hunter sire All the Gold and 12 Grand Prix show jumpers. His grandsire, Gotthard, is the most famous jumping sire in the Hanoverian breed. Gonzo I proves his jumping heritage with success in the Open and Puissance Divisions under Olympian Frank Sloothak. He also competed through Fourth Level in Dressage. Gonzo I's German FN recorded Dressage Production Index (for offspring) has now equaled his Jumping Production Index. In other words, Gonzo I's offspring are excelling in Europe in both Show Jumping and Dressage.

Greetings is in foal to Toronto for a 2018 foal. 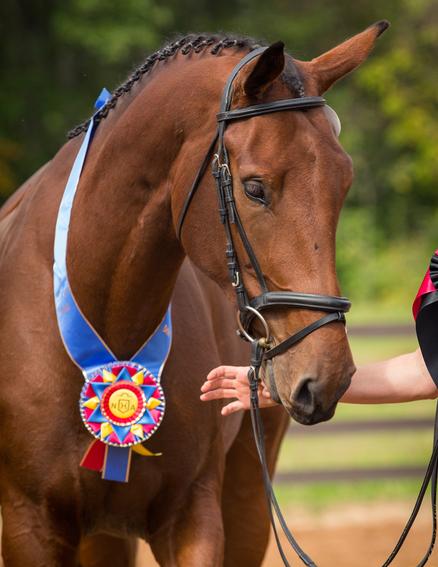 Dolce Signorina is a stunning 15.3h 2012 dark bay Oldenburg mare by Don De Marco (Donnerwetter) out of our premium producing mare Greetings (Gonzo I).  Dolce is truly lovely, with an ultra-feminine head, good bone, three solid gaits and very correct conformation. She has the sweetest temperament and enough talent to have both hunter and dressage trainers vying for her when she returns to training after foaling. 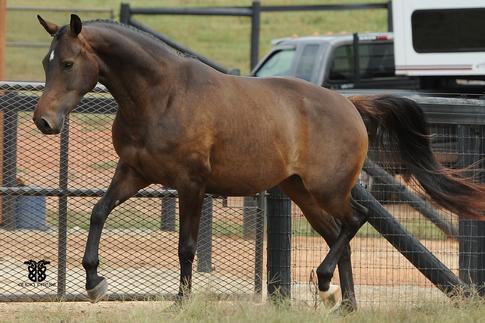 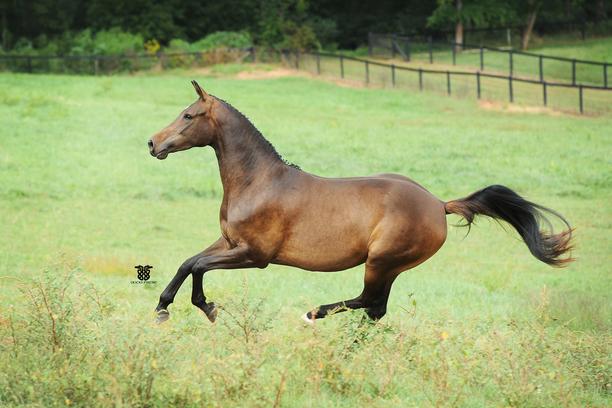